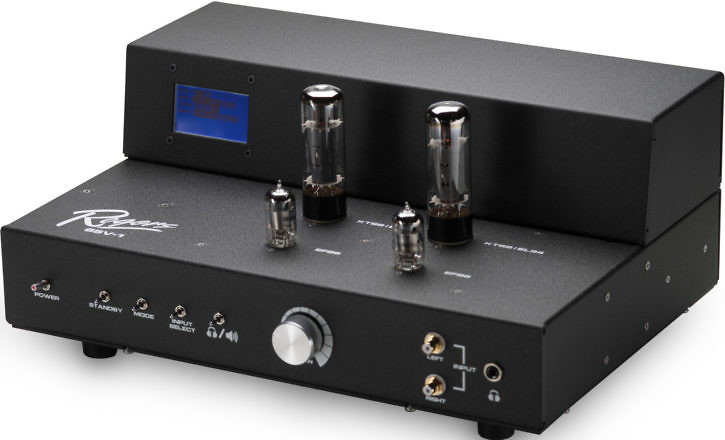 It’s been a while since tube/valve gear made any extended appearance in any of my homes. Nothing against the gear, but what with graduation and traveling and not settling down it just wasn’t practical. This is not to say that in my time I did not possess tube/valve gear from Audio Research and Conrad-Johnson, but those times were indeed fleeting, and with the renewed interest in tube/valve gear by the public I thought it high time, now that I’m more situated, to start taking a look at what’s new.
Having attended and covered more than a few Hi-Fi shows, I would always make my way to the Rogers High Fidelity exhibit room where their gear was coupled with Burwell & Sons horn speakers. There was something about the sound. As I got to know Roger Gibboni, Rogers’ President & chief designer, and Rob Pleyer, its Director of Sales, I became more and more comfortable with them, to the point that I could ask to audition their idea of a 21st century integrated amplifier, the 65V-1, a class A, singled ended, lower power design. The unit they sent came with EL34s, but purchasers can specify their preference for KT88’s if they so desire.
The Rogers High Fidelity 65V-1 integrated amplifier ($4,000) comes with a lifetime warranty and has the look and tangible feel of a traditionally designed unit.With its Teflon coated military specification wire and military specification components, not to mention its point to point wiring, one could rightly think the 65V-1 was designed to be combat ready, and that would not be too far off target. But don’t let all that military precision fool you, there’s a wrinkle here sure to please the folks in Cupertino. Rogers has designed an iPad [iOS] remote control app relying upon Bluetooth connectivity to do the following:
▪ Display the power out on a virtual VU meter
▪ Enable users to switch between triode/ultra-linear output (more on that to follow)
▪ Enable users to switch between line level inputs
It took a while for me to become accustomed to using an iPad to remotely control the 65V-1 and, mind you, I’ve always been an early tech adopter. Still, being as it was the first time encountering such, I had to remember that when grabbing for the remote that, given it’s an iPad, it does indeed multitask, and for that reason just might be off somewhere in another room. Note: In my communications with both Roger and Rob of Rogers, I pleaded with them to think about making the iOS app available for the iPhone as well. And from what I understand some new designs will be iPhone compatible, and I’m hoping the 65V-1 will be retrofitted. 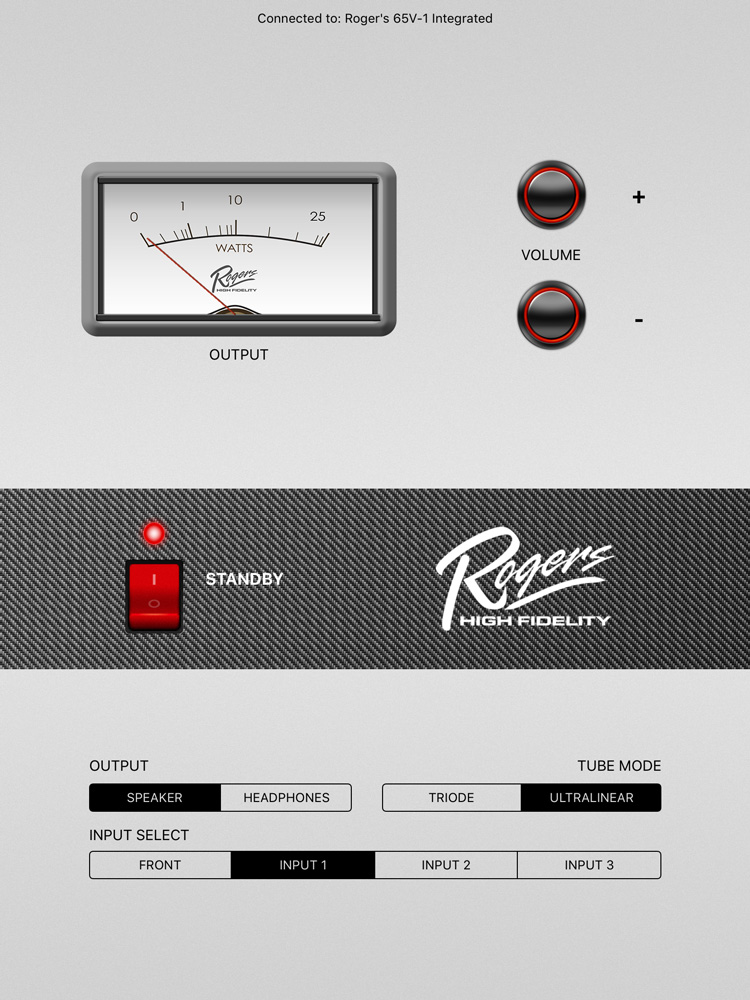